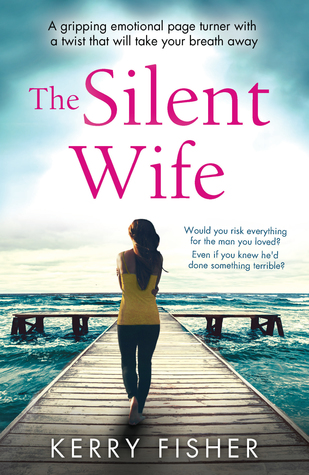 Lara’s life looks perfect on the surface. Gorgeous doting husband Massimo, sweet little son Sandro and the perfect home. Lara knows something about Massimo. Something she can’t tell anyone else or everything Massimo has worked so hard for will be destroyed: his job, their reputation, their son. This secret is keeping Lara a prisoner in her marriage.

Maggie is married to Massimo’s brother Nico and lives with him and her troubled stepdaughter. She knows all of Nico’s darkest secrets – or so she thinks. The one day she discovers a letter in the attic which reveals a shocking secret about Nico’s first wife Caitlin. Will Maggie set the record straight or keep silent to protect those she loves?

For a family held together by lies, the truth will come at a devastating price.

The Silent Wife by Kerry Fisher is about two women married as second wives by two brothers. Nico married Maggie after he lost his first wife, Caitlyn. On the other hand, Massimo (I suspect that I have been reading this name wrong) married Lara after his first wife, Dawn, left.  The two women are doing the best that they can to make their marriages work. Maggie is newlywed and she is struggling more to fit into the family. Lara has been in the family a bit longer so it seems like she is already one of them.

The book alternates between the two women’s narrations. I liked how the author presented the story is such a way that the dual narration flowed with ease.  The ending of one narration became the beginning of the next one especially since the two women’s lives were so intertwined. Sometimes, the two PoVs sort of merged hence telling the same story about a given incident but from two different narrators. I liked the two women. Its always nice seeing strong female protagonists and these two were definitely quite impressive. They were dealing with tough situations that would have broken anyone. However, through the chapters we get to see them fight and face each hurdle. I also enjoyed reading about their friendship.

It soon became apparent that the two were keeping dark secrets about their families. As readers, we get to know the secrets early in the book. After that, I was just kept waiting to see what would happen if the secrets got out. Will the relationships survive? Were there other darker secrets?

The Silent Wife by Kerry Fisher is a story about family, love, secrets and betrayal. I think the author did a great job in the portrayal of the second wives. The struggles were so real and the two definitely had my sympathies. One woman was having a hard time getting along with her stepdaughter while the other woman was struggling with keeping her husband’s secrets. This is the kind of book that you read knowing that a moment will come when all will fall apart. This made it quite a suspenseful.Despite knowing that something bad will happen, I was still shocked by some of the twists and secrets.

This was an enjoyable read although parts of the book were  heartbreaking. It was interesting to see how different relationships developed. At the same time, I liked seeing the masks fall off. I don’t think that I will forget this book or the two women any time soon. If you are looking for a well-balanced, suspenseful read about family and secrets then I do recommend this book.