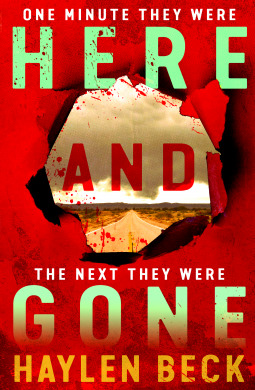 Here and Gone is a suspense thriller about a mother’s desperate fight to recover her stolen children from corrupt authorities. It begins with a woman fleeing through Arizona with her kids in tow, trying to escape an abusive marriage. When she’s pulled over by an unsettling local sheriff, things soon go awry and she is taken into custody. Only when she gets to the station, her kids are gone. And then the cops start saying they never saw any kids with her, that if they’re gone than she must have done something with them… Meanwhile, halfway across the country a man hears the frenzied news reports about the missing kids, which are eerily similar to events in his own past. As the clock ticks down on the search for the lost children, he too is drawn into the desperate fight for their return.

Here and Gone by Haylen Beck started with Audra and her two kids on the road to California. The author gives a vivid description of the journey, it was on a terribly hot day and Audra and the children were uncomfortable in the car. She made a stop to buy water and snacks and that is when first saw the Sherriff’s car. She later drove off only to be followed and stopped by the Sheriff and this is where all the drama began. It was clear from the start that something was amiss with this Sheriff and his interest in Audra. Things start going terribly wrong then and they become worse when suddenly Audra is locked up and the Sheriff denies ever seeing any kids with her.

The story is narrated through multiple narrators. Audra is the main narrator and through her, we get to know about her marriage and reasons for her trip to California. Her anguish at losing her kids is unimaginable. There were moments when she started doubting her own sanity. I admit that I also started wondering about her recollections. I mean, were the kids even there? That is how good the writing was. It made me doubt even what was supposedly obvious. I also like that her son was also one of the narrators. His narrations were heartbreaking but his portrayal was pretty impressive. Like his mom, Sean was a brave and he made me smile a couple of times. I liked the kid. There are other narrators in the story who we get to meet at different points.

I really loved the setting of this book. I am not sure if I have read any other books set in Arizona although I have watched some movies/series set there. The desert heat and the small town added to the intrigue of the narrative. The first scene on the deserted Arizona road with the Sheriff, phew…the imagery was something else. I have always been curious about the small towns with their 2/3 sheriffs and the diners and everyone knowing everyone. This town had secrets and some crazy people. The author described the setting in such a vivid manner that I could see it all. I could even feel the heat. It was the perfect setting for this story.

I liked everything in this book. The characters were well-crafted. There was a mix of likeable and unlikable characters which made the book feel realistic. I even liked the support characters such as the old guy who lived in the woods with his dog and guns. I loved the action in the book. There were no dull moments. Things just kept moving with new twists and endless jaw-dropping moments. This was a perfect fast-paced thriller where everything just came together to make it a page-turner. I can see this being made into a movie.

Here and Gone by Haylen Beck was everything I thought it would be and more.

22 thoughts on “Here and Gone by Haylen Beck”