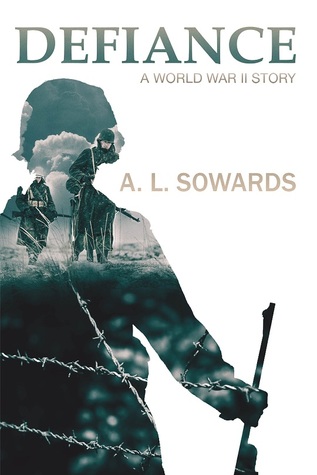 Eight years after immigrating to the United States, German-born Lukas Ley embodies the American dream: successful athlete, gorgeous girlfriend, loving family. But beneath the surface, eighteen-year-old Lukas is driven by ambition, resolved to avenge the murder of his father at the hands of the Nazi regime. Unfortunately, a failed physical throws his plans for flight school off course. Unlike his war-hero older brother, Lukas’s purpose is unclear. He can’t fly, and in the eyes of the military, he’s good for only one thing—the front lines.

From the foxholes of war-ravaged Luxembourg to the devastation of an enormous German offensive, Lukas’s journey is fraught with peril. But when he’s taken as a prisoner of war, he realizes life is about to get much worse. In the enemy camp, Lukas is viewed as a German fighting for the wrong side. Ripped from the innocence of an idealistic youth, he becomes a man beaten by the horrors of war. Now his only hope of survival is to hold tightly to his faith in God and his love of family and home. But even if he manages to make it out alive, can he ever be whole again?

Sometimes survival is the ultimate act of Defiance.

Defiance by A. L. Sowards is a WWII story. I started reading historical fiction this year and this is slowly becoming one of my favorite genres. Each book brings something new even if they mostly cover the same time period. In this story, Lukas is a German- American who has recently graduated from high school. The war is ongoing and his brother Bastian is serving his country in the military. Lucas is at home with his mom although he is about to enlist and join the forces. I like the fact that the author took us through the enlisting process. Through Lukas story, I found out about the different factors that determine the kind of work a recruit can do. Lukas had an issue with his eyesight and needed spectacles and so he faced challenges with getting the jobs that he really wanted. As a person who wears glasses, I have never thought about how this can be limiting if I wanted to join certain careers.

The story begins with life before the military. I liked the relationship between Lukas and the girl next door, Bella. It was really cute how he would sneak over to help her milk the cows so that they could spend time together. The conflicts between Lukas’ family and their neighbors was detailed from the start. It was clear that they were not accepted in the community due to their Germany heritage despite the fact that they were Americans.

The second section of the book which is the main story is set at the war. This was interesting but still tough to read about. The author did a fantastic job in this world building and the action was well portrayed without being graphic. We got to meet different soldiers through Lukas and formed connections with them. My heart broke when we lost some of the soldiers. I wanted everyone to survive but this of course couldn’t happen. I was nervous for Lukas due to his age and inexperience and was proud of each of his achievements. The character development in this book was masterfully done. Everyone was so well crafted that they all felt real.

A section of the story is set in the POW camp and then the last section was after war. I won’t say anything more about the plot-line so as not to ruin it. This is a story that every reader should experience for themselves. I loved the themes of family and friendships especially during the war. The author also covers the issue of identity. In this case, are soldiers defined by who they become due to the wars? Does war change people and make them a worse/better version of themselves? As a Mormon Christian, Lukas really struggled with his identity. I thought this was an interesting angle and couldn’t wait to see how it would work out for our young MC.

The book is narrated through first-person narration which made it even more engrossing. It felt like I was right there with Lukas sharing in his experiences and struggle to survive. Lukas was such an endearing MC and it was wonderful to follow the narrative through his PoV. The setting of the book is America, mainly Virginia, Luxemburg where the war was fought and parts of Germany such as Frankfurt.

This book was quite well-written hence making it an addictive read. It was clearly well researched and this made it more realistic. At the end, the author gives details of the research and different inspirations for the book. If you like historical fiction, then this is a book that you will enjoy.  The book  mainly focuses on the war although the love story is in the background. I have heard great things about A. L. Sowards. She is said to be one of the best authors in historical fictions and after reading this book, I totally get why. I can’t wait to read more of her books.