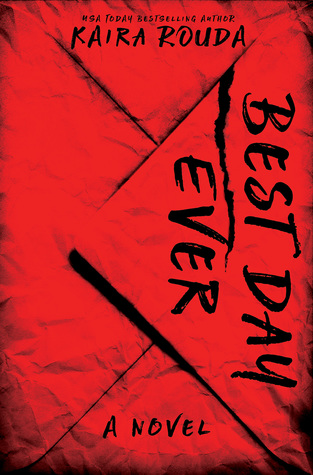 Paul Strom has the perfect life: a glittering career as an advertising executive, a beautiful wife, two healthy boys and a big house in a wealthy suburb. And he’s the perfect husband: breadwinner, protector, provider. That’s why he’s planned a romantic weekend for his wife, Mia, at their lake house, just the two of them. And he’s promised today will be the best day ever.

But as Paul and Mia drive out of the city and toward the countryside, a spike of tension begins to wedge itself between them and doubts start to arise. How much do they trust each other? And how perfect is their marriage, or any marriage, really?

Forcing us to ask ourselves just how well we know those who are closest to us, Best Day Ever crackles with dark energy, spinning ever tighter toward its shocking conclusion.

I decided to read Best Day Ever by Kaira Rouda after seeing some good reviews about it. It ended up being a creepy, addictive read. The story is narrated though a single POV (apart from the epilogue). I won’t mention who the narrator is because I think it is best to find out when you read the book for yourself.

The book reminded me a lot about the You and Hidden Bodies series. The narrator who is one of the MCs is so dark and twisted, one of those villains that you find yourself not hating as much as you should. The twisted narrations were creepy yet so addictive. I liked the  narrative style which was used. It sounded conversational such that the narrator kept addressing the readers. We found out things before the other characters because we knew the narrator’s secrets. After all, we were in his mind.

The plot-line reminded me of the TV show 24 because all events take place in one day. We get hourly updates at first and then thirty minutes and sometimes fifteen. As the time goes by, so does the story line. It gets twisted as more discoveries are made. I couldn’t believe just how much was revealed in that day.

I really enjoyed reading Best Day Ever by Kaira Rouda. It’s the kind of book that you find yourself thinking about when you are not reading it. The villain is obviously a sociopath and the fact that readers get stuck in this twisted mind is both scary and fascinating at the same time. If you are looking for a creepy, psychological thriller then you might enjoy this one.

23 thoughts on “Best Day Ever by Kaira Rouda”