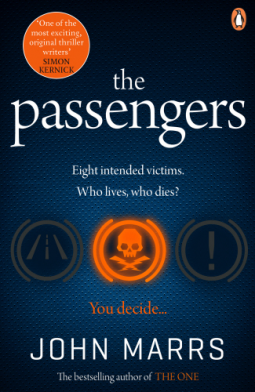 Eight self-drive cars set on a collision course. Who lives, who dies? You decide.

When someone hacks into the systems of eight self-drive cars, their passengers are set on a fatal collision course.

The passengers are: a TV star, a pregnant young woman, a disabled war hero, an abused wife fleeing her husband, an illegal immigrant, a husband and wife – and parents of two – who are travelling in separate vehicles and a suicidal man. Now the public have to judge who should survive but are the passengers all that they first seem?

Eight self-drive cars have been hijacked. 8 people sit trapped in their cars waiting to die because that is what the hacker has promised. However, before they die, their secrets are being revealed one by one. Who is the hacker? Why were the 8 picked? What secrets are they hiding?

Intense doesn’t even begin to describe this adrenaline-filled thriller. My heart was racing from the first chapter. Through multiple narrators, we get to see the nightmare unfold as the cars are taken. Who is going to live? Are they all going to die? I had so many questions and most of the answers had my jaw drop.

Fast paced, suspense-filled with such an entertaining premise, I was totally hooked on this one. Like in ‘The One’, Marrs created something different yet realistic. At first, I kept thinking about how cool it would be to have a self-drive car. Imagine being able to read, sleep or simply enjoy the view as your car takes you to your destination. I could picture myself in that world. However, the fear soon became real and the idealistic world with automatic cars became a nightmare. My heart practically raced with each twist. Some were so unexpected that it took a while to recover from the shock.

The Passengers is my fourth book by John Marrs. Each one of his books has been unique and immersive and this one was no different. It was well-written, captivating and quite twisty. I can’t wait to see what else Mr. Marrs comes up with. What an entertaining read!