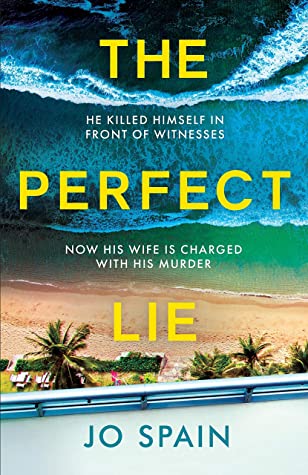 He jumped to his death in front of witnesses. Now his wife is charged with murder.

Five years ago, Erin Kennedy moved to New York following a family tragedy. She now lives happily with her detective husband in the scenic seaside town of Newport, Long Island. When Erin answers the door to Danny’s police colleagues one morning, it’s the start of an ordinary day. But behind her, Danny walks to the window of their fourth-floor apartment and jumps to his death.

Eighteen months later, Erin is in court, charged with her husband’s murder. Over that year and a half, Erin has learned things about Danny she could never have imagined. She thought he was perfect. She thought their life was perfect.

But it was all built on the perfect lie.

Erin’s life was thrown into confusion one morning when her husband jumped to his death. Immediately, I had so many questions, why did he jump? Why were his police colleagues at his door that morning? If that wasn’t enough, the author threw in alternate chapters that showed Erin at a murder trial 18 months after her husband’s death. If he jumped in front of witnesses, why does she stand accused of murdering him? Phew, I had so many questions which led to a fun roller-coaster ride in search of answers.

The story is narrated in 3 cleverly interwoven parts – The Lie, The Truth and The Whole Truth.  It spans over 3 time periods: Then (July 2019), Now (December 2020) and Harvard (December 2016) and each strand combines to create a thoroughly engrossing and exciting read. Jo Spain has created a tangled web that I was quite happy to be caught up in. The characters are deftly crafted and the plot is filled with intrigue and suspense.

This is the third book that I have read by the author. Dirty Little Secrets and The Confession were definitely enjoyable but The Perfect Lie is the best one yet. If you enjoy well-paced, enthralling, suspenseful thrillers then yes, you do need to read The Perfect Lie by Jo Spain.