He was a  Drug Lord in Colombia although his influence went beyond the boarders of his country. For instance, It is said that in the 70’s; he supplied 80% of the Cocaine in America. At some point, he was named by Forbes and Fortunes magazine as the 7th richest man in the world with an estimated worth of 24 billion dollars . This man had amassed so much wealth at the peak of his career; he owned private planes, a private zoo, mansions and apartments all over the country. He surrounded himself with an army of hooligans who carried out all his orders. His soldiers were so loyal such that most of them were ready to die for him. This man was  responsible for hundreds if not thousands of murders in Colombia. Well, this paints a picture of a villain, so you may be wondering why anyone would consider such as man, a saint.Read on and I will tell you the story of Pablo Emilio Escobar Gaviria 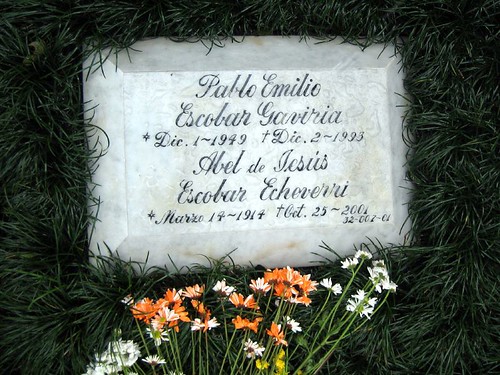 Most of the facts about Pablo sound fictitious. It is hard to imagine anyone having this kind of wealth but then again when you look at his lifestyle, it could all be true.

He was born in 1949 to a middle class family, a son of a peasant and a teacher. Despite his humble background, Pablo had big dreams and was known to have had ambitions of one day becoming the President of Colombia. Pablo  Escobar got into the the life of crime at an early age and it is said that he started with stealing gravestones. This sounds like such a heinous crime and you may wonder why anyone would steal gravestones. Well, it is said that Pablo used to sell them to panama smugglers but I’m not sure what the smugglers would do with them, probably resell them? Pablo eventually graduated to stealing  cars and finally got into the drugs business. From all the reports that i read, it seems that there was no record of Pablo using alcohol, cigarettes or even the cocaine that he was distributing. However, he started using Cannabis(i think that’s just weed) from an early age to his death.

Pablo made a name for himself in the drug world at around 1975 when he took over the leadership of the Medellin Cartel. So powerful was he that he not only controlled the drugs business but also other crimes around Medellin. Again, this all paints the picture of a villain. However, in 1980, Escobar was elected into congress. This gives a glimpse into the many personalities of the man.
Nevertheless, not everyone supported Pablo; they saw through his ‘sainthood’ and even rejected his appointment to congress but Pablo had a way of dealing with his enemies. It was called the ‘silver or lead’ option, translated from Spanish phrases of plata o plomo. Whenever he encountered opposition, Pablo would first try getting his way through offering bribes. This was ‘Silver’ option. If the bribing failed, he would shoot or issue of order to have them killed. This was the ‘Lead-bullets’ option.

Pablo had no mercy when it came to his enemies. There are hundreds of reported deaths with the highest number of  fatalities taking place on November 27th 1989 when he ordered the bombing of flight Aviance 203 killing 110 innocent people. The target for the bombing was a presidential candidate although it was later established he had not been on the plane.

Pablo had a growing influence among the masses. He was particularly popular among the poor people of Medellin. He supported different charities, built schools, churches, soccer fields and even homes for them. At some point, it is said that he had so much money that he didn’t have anywhere to keep it and so he gave it out to the poor. This strategy worked. The people of Medellin were inspired by Pablo, a man from a humble background who had made a fortune but still remembered his roots and gave back to the community. He was considered as some wort of ‘Robin Hood‘ especially around the slums if Medellin. Pablo was quite manipulative that he managed to get the loyalty of his soldiers, the poor people of Medellin and even his wife who stuck with him despite his numerous affairs.

It was hard to get Pablo brought to justice. He had ways of hiding from authority. In addition, he used intimidation, bribes and murders to escape justice. In 1991, there was so much pressure to apprehend Pablo and this led to a bizarre twist, previously unheard of in any part of the country. Pablo agreed to turn himself in to the authorities and in exchange, the government would allow him to build his own prison where he would serve a five years sentence. This prison had sporting facilities; a Jacuzzi, waterfall and even the prison guards were picked by Pablo and were loyal to him. The prison did not have any other prisoners and some of Pablo’s soldiers were the only ones behind walls with him. Pablo still managed to run his drugs empire while behind prison walls. This famous prison was called ‘La Catedral.’

In 1992, the unimaginable happened, Pablo had two men brought into the prison, tortured and killed within prison walls for being disloyal. The government could no longer turn a blind eye to the dealings at La Catedral and so they planned to have Pablo moved to a normal prison. This led to his escape. There was a huge manhunt for the fugitive with the US government coming in and specially training a task force to bring in/down Pablo. In addition, an organization called ‘Los Pepes’ made up of victims of Pablo had also launched its own manhunt for him.

Pablo met his death on December 3rd 1993 at the hands of the task force bring an end to the two decade reign of terror. There are many innocent people who died at the hands of Pablo especially in the bombings. However, at his funerals, thousands of people showed up, crying and wailing for their fallen hero.

To this day, Pablo is described as both a saint and a villain. It all depends on who you ask.
So why did I decide to share Pablo Escobar’s story? Like most people, I thought he was an enigma. For man to commit so many crimes and still remain a saint among his people, I was fascinated by his story. I have always wanted to know how he manipulated the people for so long. His crimes are unforgivable, surely everyone can see this and yet to some people, he still is considered as a hero.

I first heard about Pablo from my younger brother Sam, who gave me the documentary called ‘The Two Escobars’. This documentary tells the story of Colombian soccer at the time of Pablo’s rule and the connection between the two. It also tells the story of another Escobar, Andres Escobar who was the Captain of the National team during Pablo Escobar’s reign of the drug world. You can read Andres Escobar’s story herehttps://en.wikipedia.org/wiki/Andr%C3%A9s_Escobar

http://www.imdb.com/title/tt1493943/
Other documentaries and movies made about Escobar include;

The reason as to why i decided to write Pablo Escobar’s story is because i have just finished the latest series on his life. If you haven’t yet watched Narcos, then you should check it out. You may assume that the show is boring and predictable especially if you already know about Pablo but trust me, it is not. I have watched so many documentaries on Pablo Escobar but still found the show quite interesting because it reveals details about his personal life and other events that have not been revealed in most documentaries. For instance, it is known that Pablo Escobar was behind the bombing of flight Aviance 2013. However, from Narcos, i found out about the bomber and his family. The man who Pablo got to carry out the crime. Its a heartbreaking story and I’m glad that Narcos brought out this angle of the story.

NB: This story was put together from researches from a number of articles online and documentaries. All images were from online sources.