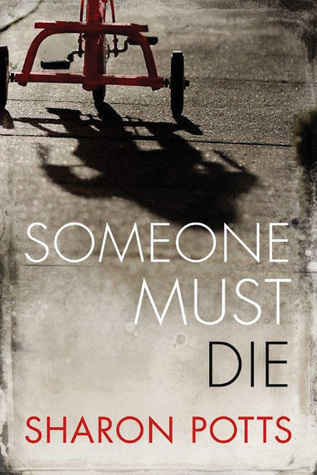 When her six-year-old nephew vanishes from a neighborhood carnival, Aubrey Lynd’s safe, snow-globe world fractures; it shatters when the FBI’s investigation raises questions about her own family that Aubrey can’t answer.

Aubrey picks apart the inconsistencies to expose the first of many lies: a ransom note—concealed from the FBI—with a terrifying and impossible ultimatum. Aubrey doesn’t know what to believe or whom to trust. The abduction is clearly personal—but why would someone play a high-stakes game with the life of a child? The more she presses for answers, the more Aubrey is convinced that her mother is hiding something.

Desperate to save her young nephew, Aubrey must face harsh truths and choose between loyalty to her family and doing the right thing. And she’d better hurry, because vengeance sets its own schedule, and time is running out.

Someone Must Die by Sharon Potts was quite a fast read for me. Th books starts with drama right from the first chapter when Ethan went missing from the carnival and the search began. The twists also begin immediately after the ransom note is delivered to the family of the missing child with very clear, scary ultimatums. Immediately, everyone became a suspect.

The story is narrated in two timelines. It becomes clear that Aubrey’s parents have a dark past that is haunting them. There are clues indicating that something bad happened in the past. One timeline deals with the current events surrounding the kidnapping while the second timeline is about the past. This second timeline is based on the turbulent 60’s with the Vietnam War at the background. There are University students trying to protest against the war. The description of the time, the dressing and what was referred to as the ‘sweet smelling marijuana’ portrayed a vivid image of the time.

The two timelines complement each other very well. The past is narrated in small bits hence not taking away the focus from the present but instead presenting explanations for current events.

The two main narrators are Aubrey and her mother, Diana (by the way, it has been so long since I found a character by this name). It was easy to sympathize with the two women. I thought both of them were likeable and I liked the bond between them. I also liked the fact that they were determined to help solve the case and get the child back. They didn’t just sit and wait for the FBI to move things along.

There were so many surprises along the way. It just wasn’t easy to guess what would happen next. In addition, this is one of those books whereby the surprises don’t seem to end even when you think that the conflicts have been resolved. The family dynamics add to the mystery in the books. It was one dysfunctional family with so many secrets.

Someone Must Die by Sharon Potts was quite an enjoyable read. I can’t think of one thing that I didn’t like about the book hence the 5 stars rating. The characters are well developed and so is the plot. Everything worked well in this book so I wouldn’t hesitate to recommend it. If you are looking for a good mystery then this one might be the right pick for you.

Thank you NetGalley and Thomas & Mercer for the opportunity to read Someone Must Die by Sharon Potts.

4 thoughts on “Book Review: Someone Must Die by Sharon Potts”